Samuel Lewis Francis was born on June 25, 1923, in San Mateo, California. He began painting in 1944 after being diagnosed with spinal tuberculosis, resulting from a U.S. Army Air Corps accident. In 1947 he studied privately with painter David Park, and soon gave up his intended medical studies, earning a BA in 1949 and an MA in 1950 at the University of California, Berkeley.

He experimented with the dominant and emerging styles of the late 1940s, particularly Abstract Expressionism and Surrealism , eventually developing a personal style of abstraction focused on dripping, cell-like forms, an all over instability, and sensitivity to colour and light, as in Opposites (1950). In 1950 Francis moved to Paris and attended the Atelier Fernand Léger, where he was exposed to the work of Pierre Bonnard and Henri Matisse which reinvigorated his interest in light and vibrant colour, visible in his 1953 painting Big Red. Producing such work led to his association with Art Informel ,although Francis never fully associated with any movement. A visit to Japan in 1957 coincided with an opening up of expanses of white space in much of his work, and his subsequent move to a larger studio in Paris resulted in the production of large-scale paintings and mural commissions, including a 1959 painting for the Chase Manhattan Bank, New York.

Francis returned to California in 1962 and resumed painting with combinations of bright colours. Clement Greenberg’s landmark exhibition Post Painterly Abstraction (1964) at the Los Angeles County Museum of Art, which focused on paintings emphasizing colour over gesture, included works by Francis. In the late 1960s, however, colour increasingly vanished from his canvases. In 1973 he formed a lithography production company, which published his own prints. Over the next decades, Francis’s style in painting and print production evolved from the depiction of bright, centrally placed shapes evocative of Tibetan mandalas (influenced by Jungian psychology) to his late-1970s exploration of more severe grid structures to a 1980s fascination with snakelike forms and colourful drips. His final decades of artistic production paralleled a succession of publishing, non-profit, and visionary enterprises: in addition to his lithography studio, Francis formed a wind harvesting and alternative energy company in 1975; helped organize the Museum of Contemporary Art, Los Angeles, in 1980; formed the Lapis Press, which focused on eclectic scholarship, in 1984; created a naturopathy-based medical research centre in 1987; and founded the Sam Francis Art Museum in 1990 to perpetuate his artistic legacy and support charitable donations.

Galerie Nina Dausset, Paris, gave Francis his first solo exhibition in 1952, and he has been the subject of dozens more at institutions that include the Pasadena Art Museum (1959); Museum of Fine Arts, Houston (1967); Centre national d’art contemporain, Fondation Rothschild, Paris (1968); Whitney Museum of American Art, New York (1972); Institute of Contemporary Art, Boston (1979); and Museum of Modern Art, Toyama, Japan (1988). He was included in 12 Americans at the Museum of Modern Art, New York (1956), and in Documenta, Kassel, West Germany (1964). In the last year of his life, Francis, suffering from cancer and unable to use his right hand because of a fall, painted 150 small works with his left hand. Francis died on November 4, 1994, in Santa Monica, California. 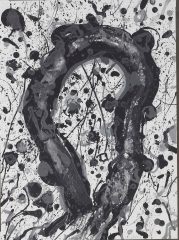