Scottie Wilson,Painter and designer, a Primitive artist born in Glasgow. His real name was Louis Freeman but was also known as Robert Wilson, but his parents had emigrated from Lithuania and as a child of 8 or 9 years old, Wilson stopped education altogether to work. At the age of 16, Wilson joined the army serving in India and South Africa. After a brief return to Scotland, Wilson went to Canada where he lived for fourteen years. He started drawings and had a successful show in Toronto in 1943. Returning to London after the Second World War in 1945  he had a one man show at the Arcade Gallery. In 1947 he exhibited in a Surrealist show at the Galerie Maeght , Paris, which was also shown in Basle, Switzerland and in New York. In 1965 he designed dinner, tea and coffee services for the Royal Worcester Porcelain Company.  His work was also used  as designs for tapestries  for the Aubusson workshop in France and for the Edinburgh Weavers Association. His work is held in many museums such as The Tate Gallery, Musée d’Art Moderne and Museum of Modern Art, New York. 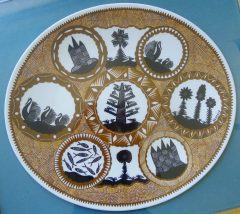