Jean Spencer, painter, artist and teacher, born in Hampshire. She attended the Bath Academy of Art, 1960-3 .  Her tutors were Malcolm Hughes and John Ernest, who introduced her to the world of systematic constructivism. She became a member of the London Group 1964. She continued her studies at University of Sussex in a teachers training course, so she could support herself whilst painting. After which she went on to teach at Bulmershe College of Higher Education in Reading (1968-88). During the early 1970s she became a member of the Systems Group which she co-founded with her partner, the artist Malcolm Hughes.  She exhibited regularly at the Systems Exhibitions of 1969-73, Collaboration and exchange was always important. Spencer was the youngest member of the Systems group whose activities reached their climax in an Arts Council touring exhibition, first shown at the Whitechapel in 1972. It is in this collaborative context that Spencer exhibited widely in Britain and abroad.

In 1977 -78 she produced ‘Working information’, a series of publications and drawings by Systematic-Constructive artists. She later worked with the Exhibiting Space Project and was included in Colour Presentations, Gardner Centre Gallery, University of Sussex and toured in 1986. From 1988 Spencer became a member of staff at the Slade School of fine Art. Arts Council holds her work. She lived in London in Putney. Jean married her lifelong partner, Malcolm Hughes, in 1997. The Tate Gallery held a Memorial Show in 1999.

‘Jean Spencer seems to be far more intrigued by the musical possibilities of constructions. Her early art, in particular, improvised upon a simple visual form expanding the theme into innumerable variations’ 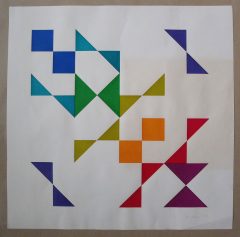