Jacques (James) Tissot was a French painter and illustrator. He was a successful painter of Paris society before moving to London in 1871. He became famous for painting fashionably dressed women shown in various scenes of everyday life and scenes and characters from the Bible.

Born in Nantes, France, his parents owned a drapery shop. In 1856/7, he travelled to Paris and studied at Ecole des Beaux-Arts where studied under Hippolyte  Flandrin and Louis Lamothe, both of whom were students of Ingres. It was in Paris that he met Whistler, Degas and Manet. He first exhibited in 1859 in the Paris Salon and in London in the International Exhibition in 1862. He began to become interested in various Japanese art forms, which had become very popular in Europe. Wood blocks of Geisha women must have influenced him.

Tissot left Paris for London in 1871, where he already had established social network and artistic connections. He began to paint elegant fashionable ladies ; Seymour Haden taught him etching and he joined the Arts Club in 1873. In 1882, Tissot returned to Paris. A major exhibition of his work took place in 1885 at the Galerie Sedelmeyer. He began to change his painting direction and started to paint Biblical events. Tissot  moved toward realism in his watercolours. To assist in his completion of biblical illustrations, Tissot travelled to the Middle East in 1886, 1889, and 1896 to make studies of the landscape and people. His series of gouache paintings were well received in Paris, London and New York. The series was purchased by Brooklyn Museum in 1900. Tissot, now a very wealthy man,  settled in Doubs, France,  where he died. 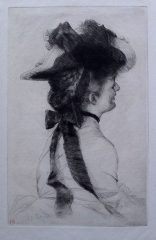