Tracey Emin produces work in a variety of media including drawing, painting, sculpture, film, photography, neon text and sewn appliqué. Born in Margate Kent, her parents, were married but not to each other, her mother was British and her father Turkish. She and her twin brother early years were loving, but unusual, her father visiting them for half a week.  Her father did support them until he became bankrupt. Forcing Tracey, her brother and mother to move into a squat and live in poverty. Her mother worked long hours in very little paid jobs, gave Tracey the opportunity to abscond from school. Even though she had very little schooling, she managed to get a place at Medway College to do a BTech Fashion Course.

Whilst at Medway College, she met Billy Childish (William Hamper) who had been expelled from St. Martins’ School of Art. They became a couple in 1982 until 1986. Childish had set up Hangmans Books in 1981-82 which publishes poetry and some fiction. Associated projects were Hangman Films and Hangman Records. Between 1982 and 1987 the daily running of the press was carried out by Traci Emin (Tracey Emin). This period in her life greatly influenced her, meeting many local Medway artists and writers through Hangmans Press.

After a year and half at Medway College and finding out that the course wasn’t for her, Billy Childish encouraged her to do a Printmaking course at Sir John Cass. She continued her studies and completed a Fine Art degree was at Maidstone College. She decided to take a year out of her studies before she started her MA course in Fine Art at the Royal College of Art. She wanted to learn how to paint in oils.

In September 1987 Emin moved to London and attended the Royal College of Art to study painting. Her relationship with Billy Childish had ended. Her early work was influenced by the artists Edward Munch and Egon Schiele. Due to not being able to store her work after the MA course, she destroyed it. She had her first exhibition at the White Cube Gallery in 1993 titled ‘My Retrospective 1963-1993’. She participated in the ‘Sensation’ show which was an exhibition of the collection of contemporary art owned by Charles Saatchi, including many works by Young British Artists, such as Damien Hirst which first took place 18 September – 28 December 1997 at the Royal Academy of Arts in London. She became professor of drawing at the Royal Academy in 2011. She lives in Margate and South of France. 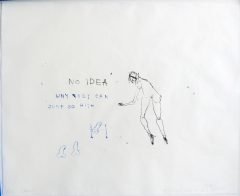 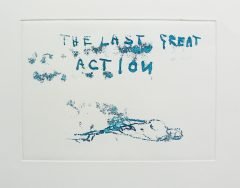 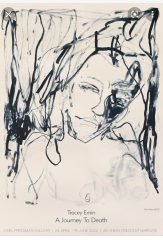 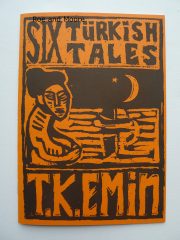