Russian 1866-1944
Born in Moscow, December 4, 1866, Kandinsky studied Law and Economics at the Moscow University. In 1892 Kandinsky got his Law degree. He became a lecturer at the Moscow University, and married his cousin Anna (Anya) Chimiakina. He pursued his academic career but at the same time paid more and more attention to art. Thus in 1895 he took the post of art director of a publishing house in Moscow. From 1896 to 1900 Kandinsky studied at the Academy of Fine Arts in Munich, Germany. His early paintings were executed in a naturalistic style, but in 1909, after a trip to Paris during which he was highly impressed by the works of the Fauves and post-impressionists, his paintings became more highly coloured and loosely organized. Around 1913 he began working on paintings that came to be considered the first totally abstract works in modern art; they made no reference to objects of the physical world and derived their inspiration and titles from music.
After successful avant-garde exhibitions in Moscow he moved to Munich where he studied under Franz von Stuck. In 1912 he published his first book ‘Concerning the Spiritual in Art’ He founded the influential Munich group Der Blaue Reiter (The Blue Rider; 1911-14) and began completely abstract painting. Franz Marc and Kandinsky organized avant-garde international exhibitions in Munich and elsewhere–exhibitions that proved to be major events in the development of German expressionism. With the outbreak of World War I, Kandinsky left Germany to return to Russia, where he taught at the Moscow Academy of Fine Arts and organized numerous artistic activities. He went back to Germany in 1921 and became one of the principal teachers at the Bauhaus school in Weimar, remaining with the school until it was closed by the Nazi regime in 1933. After the closing of the Bauhaus, Kandinsky moved to France and settle in Neuilly-sur-Seine, not far from Paris.
Living a little bit isolated from French artistic circles, Kandinsky did not lose contacts with international art, his studio was visited by many artists and critics, who came to Paris. In 1936 he participated in the exhibition “Abstract and Concrete” (London), “Cubism and Abstract Art” (New York). After the exhibition of “Degenerative Art” in fascist Germany, 57 of his pieces in German museums were confiscated; many works of the painter were destroyed. 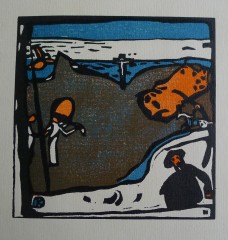