William Tucker, sculptor and modern art scholar, was born in Cairo in 1935 but returned to England with his family in 1937. William Tucker studied history at Oxford University between 1955 and 1958, and throughout this period attended life classes at the Ruskin School of Drawing, where his fellow students included R B Kitaj. He went on to study sculpture at the Central and St. Martin’s Schools of Art in London from 1958 to 1960, sharing a studio with fellow student Isaac Witkin, before taking up teaching posts at Goldsmith’s College and St. Martin’s School of Art in 1961.

Known as a sculptor, Tucker’s early work was highly experimental, making use of industrial materials such as sheet metal and fibreglass to construct abstract sculptures that are often painted in bright colours. Many of the 1960s works, such as Four Part Sculpture I, consist of several identical geometric elements assembled into abstract configurations, with solid colour used to articulate outline and volume. Different compositions are often created from the same basic units, to create series of works.

The prints/collages that we have for sale, were made in the 1960’s using similar ideas that he used for his sculpture.

William Tucker has lived and worked in the USA since 1976, and has exhibited widely in America, Europe and the UK. His work is represented in major public collections around the world, including the Metropolitan Museum of Modern Art, New York and Tate, London. 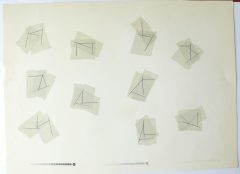 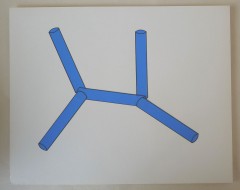