William Walcot (Russian 1874-1943)
William Walcot was an Etcher. Born in Odessa, Russia. Travelled in Europe and South America. Began studying architecture at St. Petersburg, Russia but transferred to Écolé des Beaux-Arts, Paris, later studying at the Atelier Redan. Began practising architecture in Moscow, designing the Hotel Metropole in 1898. In 1907, Walcot settled in London where he was employed as a draughtsman by the South-African born architect, Eustace Frere. In 1933, Walcot designed one London building, 61 St. James Street, but his main architectural activity was that of a freelance draughtsman. He produced drawings and etchings for architects to show their clients and to exhibit at the Royal Academy summer exhibitions. This work led to a commission from the Fine Art Society to visit Venice and Rome. His first show at the Fine Art Society was in 1912. Most of his etchings he produced between 1913-24 were published by H.C.Dickens. Walcot exhibited at the RA, RBA and RE., he was elected ARE in 1918 and RE in 1920. He illustrated several books with original etchings. 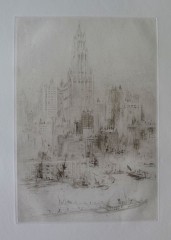