Adam Neate screen-print on cardboard 2008. In the original shrink-wrap as issued. With the artist’s stamp, numbered 875/1000, marked 0-E4 and M56 on attached masking tape.

On 14 November 2008, in an event The London Show, he and helpers left 1,000 prints, worth a total of £1 million, around London streets for anyone to pick up and keep. When night came, the first teams started in the outer southern boroughs, Bromley, Bexley and Merton, and worked their way to the centre, covering all 32 boroughs and the City of London, and finishing in the early hours. Work was left in doorways and against shop windows.Some of the work quickly appeared on eBay with starting prices ranging from 99p to £1,000; Neate had no objection to such sales, and thought it might help some people out for Christmas. He said, “It has always been a dream of mine to do a show around the whole of London, to take over the whole city in one go. I want everybody to be able to see it, but once the pieces are out there I don’t mind what happens to them.”The works were screen prints on cardboard of a man, with stamping, each being slightly different, and protected in a cellophane wrapper; Andy Warhol provided the precedent for industrial style production. Neate created the master image in a stencil, and thereafter did not touch the prints, which were made by a professional screen printer. They were rubber-stamped with his signature. 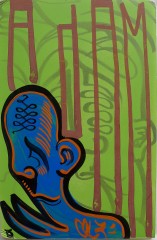