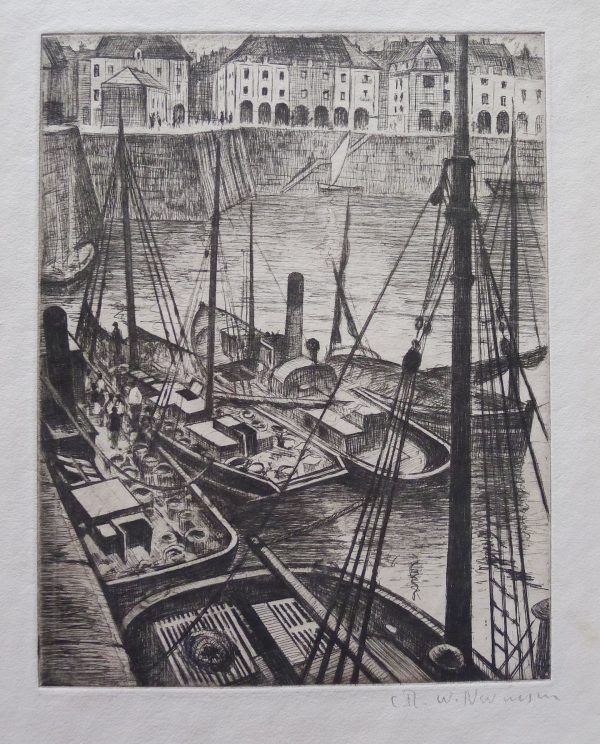 C.R.W.Nevinson etching made 1923-7, printed on hand made laid paper with the F.J.Head & Co watermark. Signed in lower right margin in pencil by the artist. The title and the number ‘142’ is written in pencil in the lower margin. The sheet two marks, one near the signature, the other in the lower margin, possibly a dirty thumb print. The sheet has recently been professionally cleaned but the verso is discoloured.

First exhibited at Alex Reid & Lefevre, London, April 1927. Edition size not recorded, probably small.  There have only been two etchings with this title sold since 1986 on Artprice, this being one of them.The original mount had Leicester Galleries written in pencil which suggests that this etching was exhibited there or held within their stock. The number ‘142′ and the title ‘Dieppe Harbour’ are written in pencil in lower margin. Nevinson had a several exhibitions at the Leicester Galleries; 1930, a solo exhibition; 1947 ‘C.R.W. Nevinson Memorial Exhibition’; ‘Etchings and Lithographs by C.R.W.Nevinson’ 1970.

Jonathan Black wrote:  ‘Nevinson later wrote ‘that he first discovered Dieppe of Aubrey Beardsly, Sickert and Conder’ during a visit he paid to the port during the summer of 1900.’ Dieppe Harbour had been a favourite subject of one of the impressionists Nevinson greatly admired, Pissarro, between 1901 and 1902. It is interesting that Nevinson focuses on fishing boats and the fact that Dieppe was still very much a working port-apart from attracting growing numbers of the more adventurous British tourist.’ Black: ‘C.R.W Nevinson. The Complete prints’. 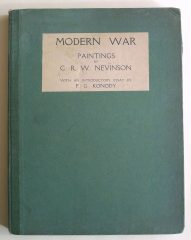 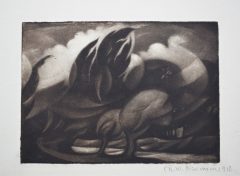 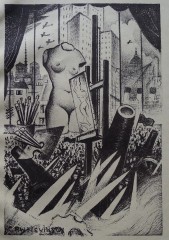 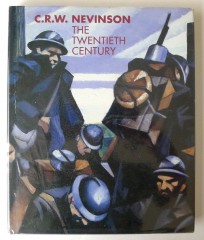 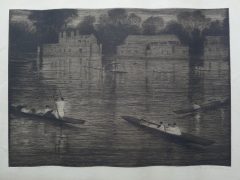 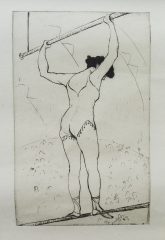