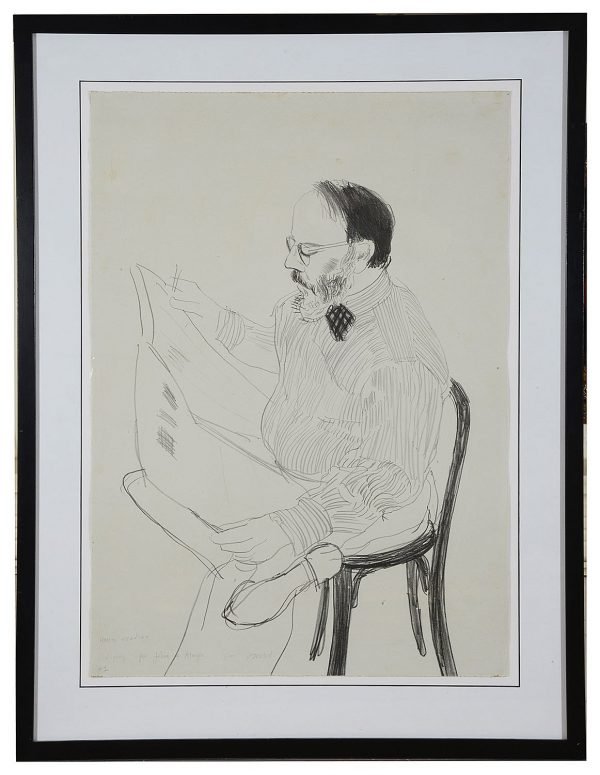 David Hockney lithograph. A trial proof, with inscription ‘for John + Alwyn from David #1’, ( artists brother, John Hockney and his first wife, Alwyn) on buff green tinged wove paper, published by Gemini G.E.L. with their embossed stampmark. Made in 1976, mounted, framed. Not examined out of frame. The sheet is not laid down but attached at the corners onto card. The sheet does have some light brown marks,not pristine, please examine the photos carefully.

The sitter is Henry Geldzahler.   Geldzahler was a Belgian-born American curator of contemporary art in the late 20th century, a historian and critic of modern art. He is best known for his work at the Metropolitan Museum of Art and as New York City Commissioner of Cultural Affairs, and for his social role in the art world with a close relationship with contemporary artists. In 1960, he joined the staff of the Metropolitan Museum of Art in New York. He became the Curator for American Art there, and later the first Curator for 20th Century Art. Among his closest friends were Andy Warhol and David Hockney.

‘They arrived in Italy at the beginning of August, and were soon settled into the villa, a lovely old Italian farmhouse with a large covered terrace, from where Hockney wrote to his parents on 3 August, “It’s beautiful here, but rather remote (45 minutes’ drive to the nearest town) therefore very good for work. Every morning Henry and I write notes for the book and then in the afternoons I draw or read … It’s wonderful having no telephone (in London it seems to ring about 60 times a day) and the slight inconvenience we soon get used to. It also encourages letter writing …”Inside there was a living room furnished with huge yellow 1930s sofas and chairs and a cast-iron stove. There was also a shower, where Hockney one day took photographs of a visiting American friend, a young photographer called Don Crib. “It was a simple room, tiled, with no curtain,” he recalled. “I love showers. A shower is more ideal than a bath for showing off the body. The sight was beautiful with the figure and the water flowing.”
Immersed in the peace and quiet, with not a hum to be heard, and only the occasional car horn to disturb the silence, Hockney felt the cares and tensions that had been assailing him slip away. “We write every morning on a terrace overlooking a pleasant valley,” he wrote to Kitaj, “a lady from the village comes and cleans (Henry) and makes us lunch, and the afternoons are spent drawing or reading. We usually go out in the evenings for dinner … Henry and I get on extremely well—no emotional hangups, which makes me feel calm and rested …” He enjoyed the writing, which he found easier than he had expected, telling his mother that it was “obviously a habit one can get into,” and completed a number of drawings. These included a charming study of his bedroom mirror, draped with scarves and bow ties, and a number of studies of Henry, usually engaged in his favourite pastimes of reading and smoking cigars.’   David Hockney The Biography 1937-1975  by Sykes  (Chapter 12 )

‘Laura (David Hockney’s mother) was well enough to come to London at the end of January to see off her daughter-in-law Alwyn, John’s wife, who was on her way back to Australia, where they, following in the footsteps of Philip Hockney, had emigrated in 1968. Hockney booked her and Ken into the Strand Palace Hotel and took them for dinner at one of the most fashionable restaurants in London, Odin’s in Devonshire Place. “Met David’s friend,” wrote Laura, “who cooks all the food himself, & getting our order left us to go and cook it … Ken had steak and fried onions & David a foreign dish!…Brought back souvenir menus which David and Patrick Procktor had drawn. Later our friend the cook said he would toast Alwyn in Champagne.’  David Hockney The Biography 1937-1975  by Sykes  (Page 11) 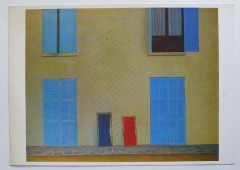 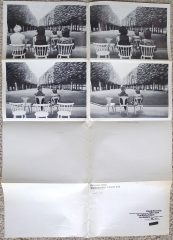 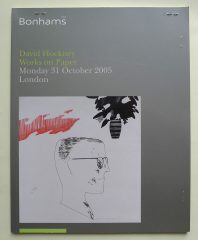 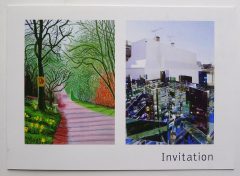 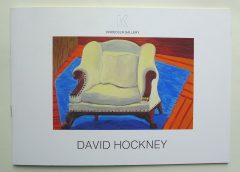 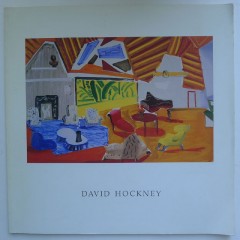