Eric Gill complete set of ‘Stations of the Cross’

A complete set of fourteen wood engravings printed from the original blocks for ‘Engravings by Eric Gill’. Published by Douglas Cleverdon, printed by The Fanfare Press, 1929. One of 400 copies printed on paper specially manufactured for this edition with the numbers ‘16’ to ’29’ in top right corners as issued. All in in very good. Not mounted / matted.

The wood engravings were made in 1917 after his designs and relief sculptures that Gill made for Westminster Cathedral in 1914. They include the following:

‘Eric Gill was thirty-one and had been a sculptor for just three years when, in August 1913, he was approached by John Marshall, the architect-in-charge at the Cathedral. By this time the donors of the Stations of the Cross (who had paid for them in 1909) and Cardinal Bourne were getting increasingly impatient at their non-appearance, ten years after the opening of the Cathedral.

In April 1914 Gill produced a 9 inch square design (now in the British Museum) for the Stations which was approved by Bourne in May. The fourteen panels, each 5ft 8in square, were to be carved in low relief in Hopton Wood limestone for the very low price of £765.

At this time Gill was almost unknown as a sculptor and extremely anxious to get such an important commission – hence the price. Even before his designs were accepted he had produced at his own expense a sample 4ft 6in version of the Fifth Station (Christ with Simon of Cyrene) and put it up in the Cathedral. Once commissioned he set to work at once, producing the Tenth Station (Christ is stripped of his garments), for which he used himself as a model, and the Second (Christ receives the Cross) by November 1914. Then followed the Thirteenth (Christ is taken down from the Cross) and the First (Christ is condemned to death) by June 1915, the panels being carved in the studio with the final touches being added by Gill in the Cathedral.

First reactions were unfavourable. Gill himself was unhappy with the Tenth Station and Marshall’s response to it was that it showed Gill’s style was ‘neither suitable for the peculiar light of the Cathedral nor the Catholic public’ – to which Gill’s advice was to cover it with a sheet and wait for more.

By June 1915 the first four Stations were on view and then the letters started, first to the Universe and then to the Observer. On the one hand the Stations were variously described as ‘grotesque and undevotional’, as ‘cold as the mind that produced them’ as hideous, primitive and pagan. On the other they were seen as ‘dignified in conception, superb in outline and restrained in feeling’ and as showing ‘admirable breadth and simplicity of design’.

In his autobiography Gill writes ‘there were sufficient people to tell (Cardinal Bourne) the things were good to outweigh those who said they were bad – especially when you take into account the infernal business of taking all the panels down again’ – a pretty broad hint that Bourne himself was not over keen on them. So he continued to carve. The first four were followed by the Fifth, Fourth, Third and Sixth by the end of 1916, then the Seventh and Eighth in 1917 and finally the Ninth, Twelfth, Fourteenth and Eleventh (the last being re-carved at Marshall’s request) by Good Friday 1918 when they were dedicated. As shown by his sketches in the V & A, Gill continued to use himself as a model – for the left-hand soldier in the Second and Christ’s hands in the Third, while Our Lady’s hands in the Fourth are those of his wife, Ethel Mary.

Gill’s retrospective view of the Stations is characteristic. He wrote ‘I really was the boy for the job, because I not only had a proper Christian enthusiasm but I had sufficient, if only just sufficient, technical ability combined with a complete and genuine ignorance of art-school anatomy and traditional academic style’. He had become a Catholic just six months before he was approached about the Stations – indeed this was one of the reasons he got the job. For him they were both a statement of personal belief and church furniture produced for his fellow Catholics as a focus for prayer – ‘a statement without adjectives’. The figures are impassive and are meant to be so, for the emotion must come from us.’ Patrick Rogers  https://www.westminstercathedral.org.uk/tour_stations.php 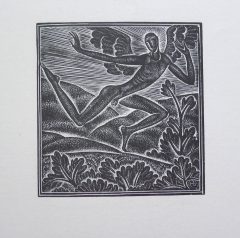 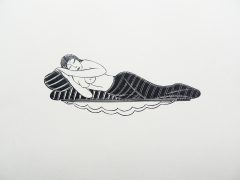 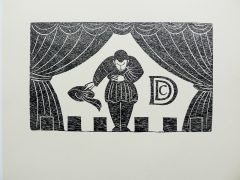 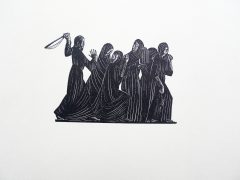 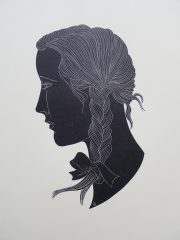