Eric Gill copper faced wood block made in 1916 as a Christmas card. The image is a Nativity Scene outlined with the words, “Who were the first to cry nowell animals all as it befell”, all in capital letters. Made in hard wood it has been cut into the plank and the block has been faced in copper for mass printing. The edges of the copper facing are bevelled for printing purposes but the lower left corner is dented and the surface has minor light scratches, otherwise in very good condition.  Includes the wood engraving as published in 1929.

Reference: Physick 50. (D49) 16.  Christmas Card. The block was subsequently used as a tailpiece for ‘The philosophy of Art’  (E.R.G.85)  by Jacques Maritain, translated by the Rev. John O’Conner, S.T.P., with an introduction by the artist,No.39 of the publications of the St. Dominic’s Press, Ditchling, Sussex, 1923; as plate 8 of ‘Engravings by Eric Gill ‘ (E.R.G.17) with a preface by the artist, printed by the Fanfare Press London, published by Douglas Cleverdon, Bristol 1929. Image size:  51 x 51 mm

(Very similar image to the image Physick 50, (as mentioned above)  is Physick 51. The image to Physick 51 is reversed and there is no text in the lower margin. This image was cut on a plank and only a few proofs survive. Physick states that the block is now in the possession of J.G. Wilson of J & E Bumpus Limited, London.)

The poetic line is from the poem, Carol, written by Kenneth Grahame in his book, ‘Wind in the Willows’, first published in 1908.  The poem was sung by the field mice to Mole and Rat.

Wood is vulnerable from constant use. Gill would have made this block for his personal use in printing Christmas cards for friends and family. For mass printing the block had to be copper faced. See description below from University of Reading Web Site : The Museum of English Rural Life.


‘A basic description of the process is as follows. The engraved surface of the woodblock was pressed into hard wax making an impression that could be used as a mould. This mould was then dusted with ‘black leading’ to provide an electrically conductive surface. The mould was placed in an electrolytic bath and a thin shell or skin of copper deposited over the surface of the mould. The copper skin was stripped off the mould, laid face down in a tray and the back filled with type metal to give it strength. The resulting metal electrotype, commonly called an electro, was then mounted onto a block of wood and printed alongside type. In this way many copies could be made and distributed of one wood-engraving.’ 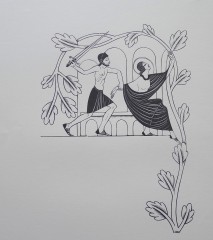 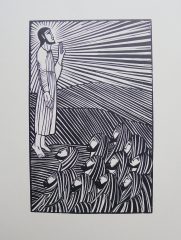 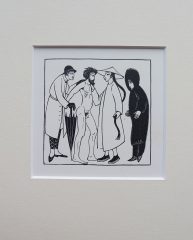 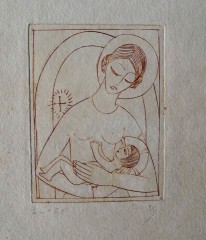 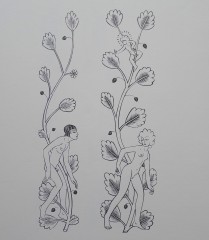