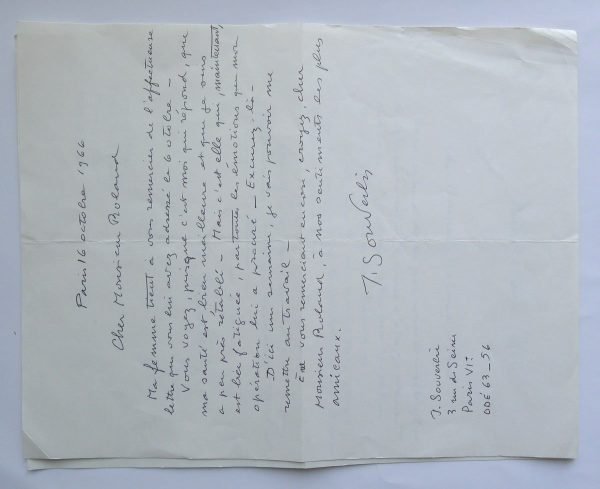 From the collectrion of Heinz (Henry) Roland of Roland, Browse & Delbanco.. Paris Self-published. 1966 First edition Jean Souverbie. Two autograph signed letters to Henry Roland. Headed 3 rue de Seine, Paris VI. Dated 4 and 16 October 1966. In French. Thanking Roland for sending a cheque and apologising for not replying sooner as he has been in poor health and undergoing an operation.

Jean Souverbie (French, 1891–1981) was a Figurative painter of the French school, known for his compositions of still lifes and nudes. It was a meeting with Maurice Denis and Paul Sérusier in 1908 that influenced Souverbie to take up a career as an artist. Led by these two members of the Nabis group, Souverbie enrolled at the Académie Ranson in 1916, where he befriended Pierre Bonnard, Edouard Vuillard, and Félix Edouard Vallotton.Cubist tendencies were apparent in his work during the 1920s as a result of his contact with the work of Georges Braque. However, his sensuousness allowed him to combine a Cubist vocabulary with a more traditional naturalism in order to create his voluptuous, classical nudes. His monumental figures, his taste for allegorical subject matter, and simplicity of composition reveal his interest in the great French classical painter, Nicolas Poussin.Souverbie’s classicism does not only relate to 17th-century tradition, but also to the laws of perfect beauty posed by the Greeks. His style lent itself to monumental painting, and, when he became a teacher at the École des Beaux-Arts in 1945, an atelier of mural painting was created for him.In 1925, Souverbie was under contract with the Galerie Vavin-Raspail, which hosted the Section d’Or exhibition that year, bringing him into contact with André Lhote, Albert Gleizes, Pablo Picasso, Louis Marcoussis, and many other members of the Parisian avant-garde. After his first solo show at Vavin-Raspail in 1926, Souverbie went on to have a show of 54 Cubist paintings at the Bernheim-Jeune Gallery in 1929, which solidified his reputation as an important figure in the Parisian art scene of the 1920s and 1930s.Today, his work is contained in public and private collections around the world, including in the Museum of Fine Arts, Boston, the Musée Rolin in Autun, the Staatsgalerie in Stuttgart, and the Petit Palais in Paris.