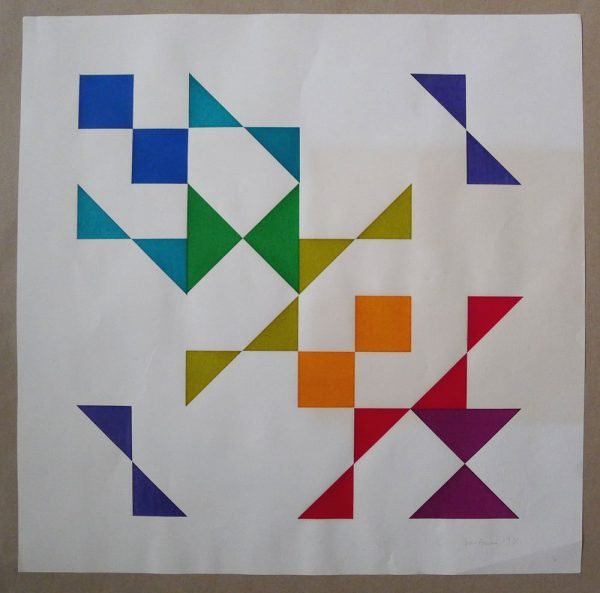 A colour relief print signed and dated 1975 in pencil. The original print is from a very small edition size of 4, of which this is number 1. There is a slight discolouration on the sheet, from the laying over a further sheet on the right hand side (see photograph). Light handling creases, marginal crease lower right.

PROVENANCE: The Lucy Milton Gallery, London. This print is from the propieters personal collection. Lucy Milton opened her gallery in 1969 in Notting Hill and her gallery became a showcase for international constructed art. Both as a group and as individuals, we benefited from her help and encouragement.

Jean Spencer spent the first half of her career constructing shallow monochrome reliefs reliant on numerical systems, and the second half painting minimal abstract compositions based on complex colour systems. In 1969, Spencer was a founding member of the Systems Group.

Born in 1942, Spencer enrolled at Bath Academy of Art in 1960, where she was heavily influenced by her teacher, Malcolm Hughes, who had turned his back on representational painting in favour of systematic abstraction. Producing shallow reliefs, Hughes employed mathematical concepts to arrange the sizes and shapes of his geometric forms. Such an approach was enthusiastically adopted by Spencer, and not long after graduating, they enjoyed a lifelong personal and artistic relationship. Spencer began teaching art at Wychwood School in Oxford, though was soon making great strides as an artist. Her white relifs were shown for the first time in 1964, at a group show at the AIA Gallery alongside Kenneth Robinson and Michael Tyzack. A solo exhibition at the Bear Lane Gallery, Oxford, followed shortly after.

In 1969, with Jeffrey Steele, David Saunders and Hughes, Spencer founded the Systems Group, of which she was the youngest member. Influenced by Kenneth and Mary Martin’s constructions and the architecture of Max Bill, the Group placed an emphasis on the importance of clarity and economy. Characterised by geometric elements adhering to pre-determined (often mathematical) ‘systems’, the final work of art aspired to possess intellectual as well as aesthetic value. Initially, the name ‘Systems’ proved contentious, for as Spencer herself admitted, “the ‘system’ is what controls, limits and suppresses spontaneity and individual freedom”. However, she explaind how her white reliefs are in fact about exploring possibilities and permutations within a numerical system; specifically, of how many variations can be produced from arranging and overlapping identical squares. Furthermore, while Spencer made vast preparatory sheets of models, diagrams and notes, the final result is an elegant, minimal design, with no trace of “the mechanics of the system”. Indeed, the sculptor John Carter recently commented how he found a “tenderness and subtlety” to Spencer’s work, which was quite unexpected given the meticulous and intellectual approach to its production. As Alan Fowler has also observed, it was Spencer’s interest in striving for variation that separated her work from that of her contemporaries. The first Systems show was staged in Helsinki, 1969, and although constructivist abstraction has since suffered neglect in the UK, the Systems Group did enjoy various survey shows here in the early 1970s, including at the Arnolfini Gallery in Bristol, and a touring show that opened at the Whitechapel Art Gallery, organised by the British Council and curated by Stephen Bann in 1972.

By the mid-1970s, Spencer began studying colour and their relationships. At this time, the Systems Group was beginning to lose its momentum, and Spencer had come to recognise that “chromatic complexity supersedes geometrical complexity”. In anticipation of her new work, she read the colour theories of JMW Turner and Kasimir Malevich, as well as those found in science journals. She looked at the use of colour in paintings by Piet Mondrian and the Swiss artist Richard Lohse, whom she admired, and proceeded to spend much time experimenting in the studio – her notepads reveal how she mixed different pigments, and then in different quantities, the implications of which were recorded in painstaking detail. Ultimately, Spencer was attempting to find colours that would harmonise with one another; not a single pigment could overpower the others. This relied as much on research as it did Spencer’s intuition and handling of paint, of achieving just the right hues, tones and intensity. As Nicholas Serota has remarked, her paintings “lie on the boundary between reason and emotion, order and expression”. As with her earlier white reliefs, variation was at the core of the colour paintings. Much of this new work was shown not in the UK but in Europe, a fact which coincided with Spencer’s invitation to join Arbeitskreis in 1977. 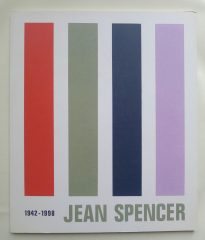 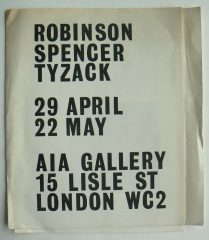