A Martin Smith large dish or abstract form made in 1992/93. Made in stained T material with an impressed mark and paper label MS15. The wall is of double thickness with a slight gap on the inside between the wall and bottom of the piece. Handbuilt and fired to stoneware and polished to a smoth surface.

Exhibited at ‘The Raw and the Cooked‘ travelling show at the Barbican, London (1993), The Musuem of Art, Oxford and Gynn Vivian Art Gallery, Swansea in 1994. As illustrated in the catalogue, page 76.

Ceramicist. Martin Smith attended the Ipswich School of Art; Bristol Polytechnic Faculty of Art & Design where he studied ceramics continuing his studies at the Royal College of Art. He taught at Loughborough College of Art & Design 1977, becoming Head between 1980-83, later moving to London teaching at Camberwell School of Arts & Crafts. Becoming Professor of Ceramics and Glass at the Royal College of Art, a position he held for 16 years, Smith has taken on a new role as Senior Research Fellow at the RCA, where he is researching the ‘Potential of the Digitally Printed Ceramic Surface’. He has recently designed the domestic-style gallery space for the Anthony Shaw Collection in York Art Gallery as well as continuing to explore his work in the field of ceramics.
Since the start of his career in the late 1970s, Smith has exhibited internationally and examples of his work can be found in many public collections worldwide. A major retrospective was held at the Museum Bojimans Van Beuningen, Rotterdam, in 1996 and in 2001 he made Wavelength, a site-specific work for Tate St. Ives. He is also known for his multi-disciplinary approach to design and site-specific furniture 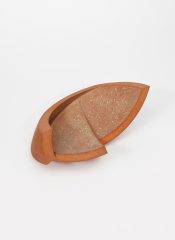