Natalia Goncharova lithograph as published in Pustynniki; Pustynnitsa. Dve poemy (Hermits; Hermitess: Two Poems), text by Kruchenykh. Published by G. L. Kuz’min and S. D. Dolinskii, Moscow in 1913, in a small edition size of only 480 copies, many of which have not survived due to the quality of the paper. The  sheet is discoloured and has become yellow, else very good.

There is Russian manuscript text in ink on verso which is a translation of the poem::

The only way of getting Poles,

To honour the peace deal they have signed

Is by tightly clenching our proletarian fists,

And putting carefree jubilation to one side.

The Soviet Polish war started in 1920, so presumably the inscriptions dated from the early 1920s.

‘Natalia Goncharova’s lithographs are executed in a “primitivist” style based on traditional Russian icon painting that inspired numerous contemporary painters and printmakers. 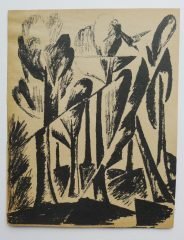 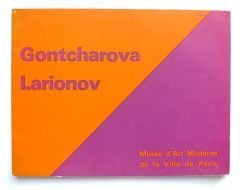 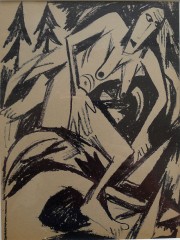 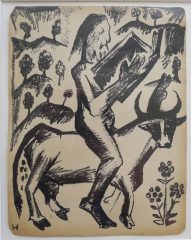