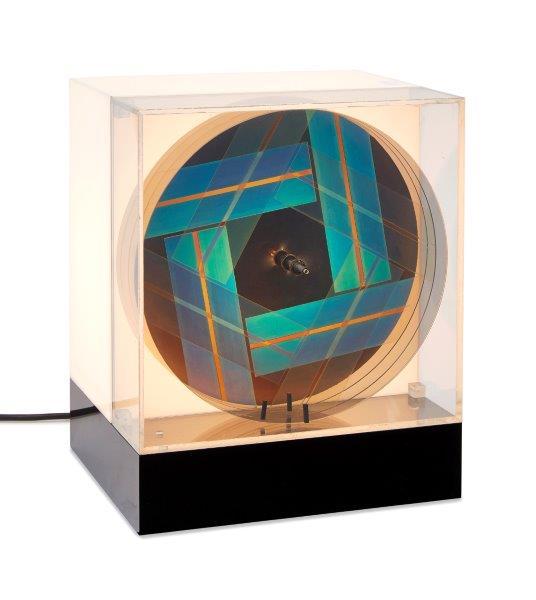 An Oliver Bevan kinetic chromotropic sculpture made of a lightbox with coloured gels on acrylic discs with electric motor, titled ‘Expansion’

Provenance: London Arts Gallery, where purchased by the present owner in 1974

Note: the artist has kindly confirmed the authenticity of this work.

This was the third and last of the Chromatropic boxes, it has three revolving discs driven from the rim. The image changes structure and colour very slowly over a cycle of hours.

Bevan’s first solo exhibition at the Grabowski Gallery, London, in 1965 featured eight Op Art paintings with hard edges and colour fields in black, white and shades of grey, plus red and blue in Both Ways 1 and 2. The paintings were based on isometric projections of a cube and played on the viewer’s visual perception through tonal flicker, figure-groud reversals and other optical ambiguities which Bevan described as ‘a conflict between the certainty of the geometry and the uncertainty of the perceptual mechanism in dealing with it’, adding that the paintings are ‘clues to what might be possible’. The exhibition attracted favourable reviews from critics such as John Dunbar, Norbert Lynton and Guy Brett, with the latter concluding that it ‘achieves its aim of intensifying our awareness of our perceptual processes, which implies our awareness of the visible world’. A second exhibition of ten new paintings at the Grabowski Gallery in 1967 introduced shaped canvases and a larger colour palette to further ‘provoke the viewer into an active relationship with the work’. This concept of viewer participation – whereby each person brings their own perceptual interpretation to the paintings and thus contributes to the creative process – was made tangible in a third exhibition at the Grabowski Gallery in 1969. This featured seventeen new works, including a tabletop piece consisting of sixteen square tiles which were each divided diagonally into two of four colours and could be rearranged by the viewer to create different combinations of figure and ground. Bevan then developed the idea further, using six magnetic tiles on a square steel sheet that was covered with black canvas and could be hung on the wall like a painting. This new work, Connections, was shown at the Institute of Contemporary Arts  in 1969–70 as part of Play Orbit, an exhibition of artworks that visitors could interact or ‘play’ with in the manner of toys and games. Meanwhile, a chance visit to the Grabowski exhibition by John Constable, the Art Director at Fontana Books, led to a commission for Bevan to create the cover paintings for the first twenty titles in a series on vanguard thinkers and theorists called the Fontana Modern Masters. For this Bevan drew directly on his Connections piece, creating two sets of geometric cover designs that the reader could arrange as ‘tiles’ in a larger artwork. The books were published in 1970–73, by which time Bevan had also collaborated with the composers Brian Dennis and Grahame Dudley on a production at the Cockpit Theatre of Dennis’s Z’Noc, a thirty-minute experimental piece in which the musicians take their cues from a constantly changing display of abstract colours, shapes and shadows that Bevan created by projecting light onto three mobiles. This led Bevan to experiment with Polaroid as a medium for other types of Kinetic Art, and in 1973 he produced the first of his light-boxes using polarising filters and fluorescent tubes, with more complex versions employing electric motors and sets of slowly rotating discs. These lightboxes became the canvases for ‘chromatropic paintings’ which, as Bevan explained, enable ‘colours to be selected in time as well as space, resulting in a mesmerising display of changing colours and shifting shapes as forms dissolved and reappeared.