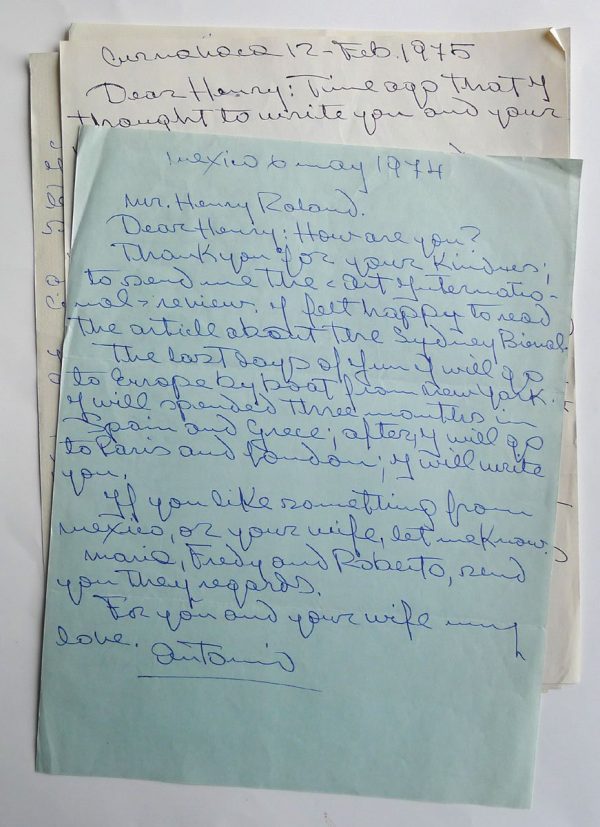 Antonio Peláez. An autograph signed letter to Heinz (Henry) Roland of the London gallery Roland, Browse and Delbanco. On Gran Hotel Velasquez, Madrid head paper, circa 1970. Signed. Discusses his travel plans. Other letters from 1974 and 1975 discussing travels, exhibitions and piublications.

Antonio Peláez was born in Llanes, Asturias in the north of Spain in 1921. He grew up in an artistic family and was drawn to music, literature and painting at an early age, exploring these through drawing and painting while still in Spain, studying there to the high school level and beginning his art studies at the Pérez Galdós Institute in Madrid. He immigrated to Mexico in 1936, obtaining Mexican citizenship in 1937. He continued his art studies at Escuela Nacional de Pintura, Escultura y Grabado “La Esmeralda”, where he met other artists who influenced his work, if not directly, then through conversations and other contact.

In the 1940s, he traveled for five year in Europe, to Italy, France, Greece and Egypt, where he studied the works of Antoni Tàpies, Jean Dubuffet, Robert Motherwell, Louise Nevelson, Robert Rauschenberg and Mark Rothko .

Peláez died at the age of 73 in Mexico City.