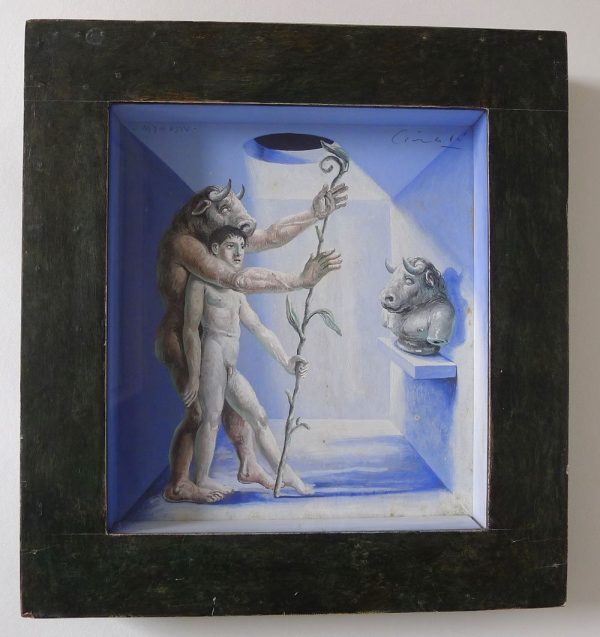 Ricardo Cinalli ‘The One Who Leads You’

The Rcardo Cinalli tempera painting is on tissue paper within its  own decorated boxed frame. The painting is signed in top right corner and dated 1994 in roman numerals in top left corner. The painting has some slight foxing on the image, else good. Unexamined out of the frame.
Size 265 x 235mm

Shown at the Beaux Arts Gallery, London 1994. One of 6 similar ‘Blue boxes’ which the artist has written about:
As if it was a Box of Babel with a broken fourth wall; ‘Blue boxes resemble benevolent prisons because of their blueness, but in any case prisons, boundaries, false skylights, false exits. Inside them useless staircases, walking sticks leaning against walls, scaffolds that do not build anything, sacrificial stones that have lost their ritual significance. Winged beings, Madonnas, ghost projections, all damned things deprived of communication. Each box is a variation of this one theme, and is a reminder of a contemporary Babel.I turn the tower into a box metaphor. The sign of our century is to show its own confusion that must be exhibited and commercialized. Everything is a show, and thus these boxes lack their fourth wall and become stages’.
There are many clips on YouTube about this artist.

A copy of the catalogue comes with the painting.