Robert Austin drawing of a Bell Ringer.  Drawn in ink with brown crayon, the model holds a cloth in his hand to protect it from friction from the ropes. Drawn on cheap sketch paper, there is an old soft diagonal fold through the image, and the left margin, which can be mounted out, is heavily creased, otherwise in good condition.

Campbell Dodgson wrote that Austin would do studies in situ and figure studies, incorporating the two together. Although Austin never did a plate of Bell Ringers, he did several plates of Belfries, bells and a Bell ringers Wife (Etching 1934). I think this sketch is a study with possibly a etching of bell ringers in mind, but not completed. In this figure study, I think Austin has used Mr James Woodford, who was a sculptor and who regularly modelled for Austin. Woodford appears in several of his etchings such as ‘Man With a Crucifix’ (D45) seen below ; ‘Man With a Cross’ (D46) and ‘The Stone Breaker’ (D.57).

Purchased at the Studio Sale in 2004, Sothebys. 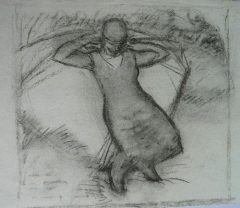 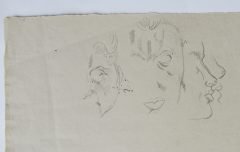 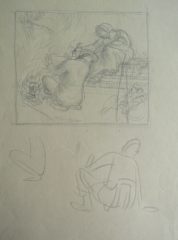 AUSTIN, Robert
Robert Austin drawing of a couple seated by a fire.
£225.00 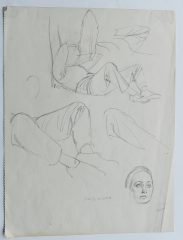 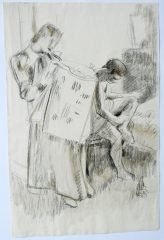 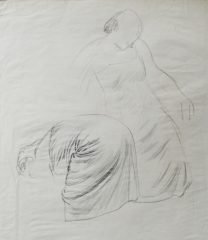