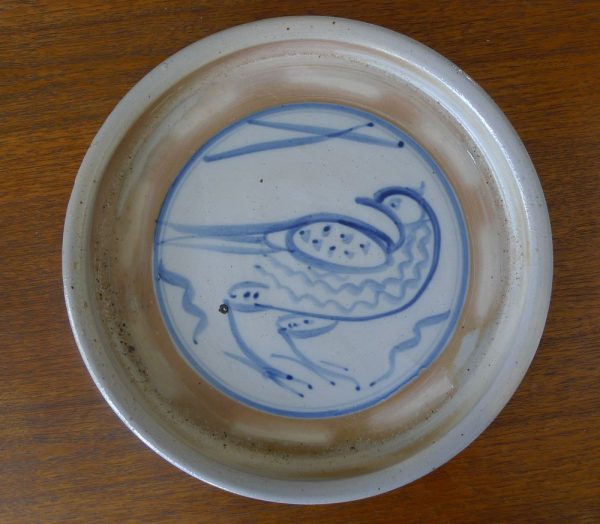 A large hand thrown platter by Svend Bayer with a hand painted bird design. Made at the Sheepwash Pottery. In excellent condition.

THE HOLDEN COLLECTION. BIDDY & JOHN HOLDEN. This family collection of Wenford Bridge & related studio pottery was purchased for use & ornament between the 1950’s & 1970’s by the late Biddy & Dr John Holden. The Holdens moved to Delabole on the edge of Bodmin Moor when Dr Holden joined the local medical practice in the 1950’s. They became well-known in North Cornwall, artist Biddy in particular, as a supporter & motivator for the arts in the area. The Holdens came to know & eventually became very close friends of Michael & Mariel Cardew after Dr Holden became doctor to the family & the pottery assistants. The Holdens also came to know well all the assistant potters who worked at Wenford Bridge, in particular Svend Bayer, who became their son-in-law when marrying their artist daughter Jane. Mariel Cardew was Godmother to their other daughter Sally. Sally became curator of the Camelford Museum & organised ten Cardew exhibitions at the Museum. There were regular supper parties at the Holden house for the Cardew’s, their pupils & visiting potters to Wenford Bridge such as Ladi Kwali who visited in 1962. Dr Holden had served in Ghana & Nigeria during WWII, so had a mutual interest with Michael Cardew in West Africa. He was later able to treat Michael Cardew’s tropical illnesses contracted during his time managing potteries in Africa. Most of their Michael Cardew pieces in this auction are from the 1950’s & 1960’s & the collection includes some significant examples from Wenford Bridge & Abuja.