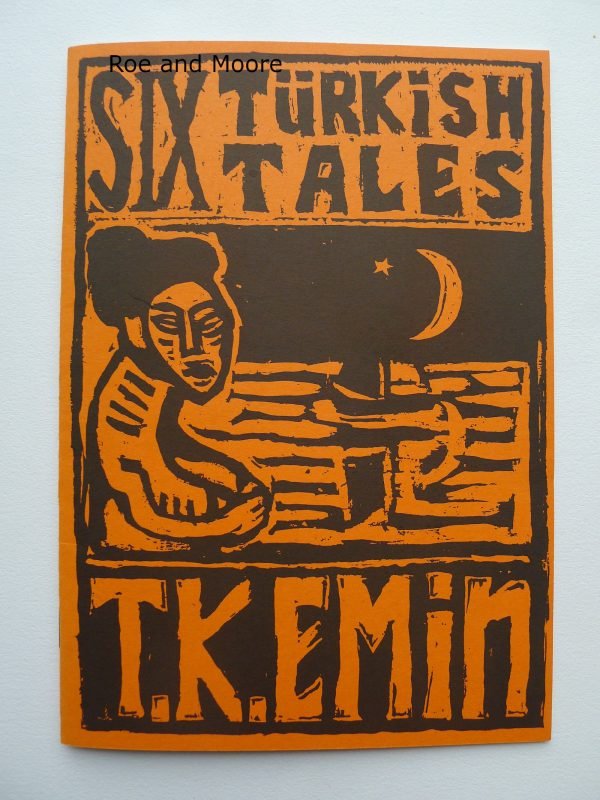 Tracey Emin first published book ‘Six Turkish Tales’ Circa 1987. Published by Hangman books and written by T. K. Emin, (Tracey Emin) Printed by the River Press, Maidstone on a Ubix photocopier. Bound in original orange pictorial card wrappers.  Not paginated. [24pp]  With four full page and one half page illustrations in black and white only, after lithographs by Emin and wood blocks by Hamper. Printed on machine made paper. Limitation not stated. The cover and Hangman motif are by Bill Hamper (Billy Childish). The five images and text are by Tracey Emin. The back cover states that ‘Miss Emin is also a painter/printmaker and continues to live in Rochester Kent.’  Includes the cardboard packaging from Counter and the note from Tracey on the verso of a bag are included in this unique little sale. Mint condition.

This is Tracey Emin’s first published book, published by artist Billy Childish and edited by Bill Lewis, a Medway poet.  It is a very scarce little book. The limitation is uncertain but we have been informed that ‘certainly at least 100, but probably not more than 200’ were printed’. However they very rarely come up for sale. None can be found in museum or library collections.

Provenance:
The previous owner had bought the book in the early 1990’s alongside a number of early Hangman Books publications. In autumn 2003 he purchased some work from Counter Editions (Charlotte Road), and on collection of the work, Carl Freedman wasn’t in, but Tracey Emin was looking after the gallery that day. He had previously left this copy of Six Turkish Tales for her to sign, but (with a smile) she told him she couldn’t sign the book, but would write a little note on the bag that it was in. Apparently she was utterly charming.