He was born in Bruyères, Vosges, the son of Lucien Jean Baptiste Lurçat and Marie Emilie Marguerite L’Hote. He was the brother of André Lurçat, who became an architect. After his secondary education at Épinal, he enrolled at La Faculté des sciences de Nancy and studied medicine. He went to Switzerland and Germany (Munich) and in leaving his educational path, he went to the workshop of Victor Prouvé, the head of the École de Nancy.

In 1912, Jean Lurçat took residence in Paris with his brother André. He en-rolled at the Académie Colarossi, then at the workshop of the engraver, Bernard Naudin. He met painters such as Matisse, Cézanne, Renoir; his friends included Rainer Maria Rilke, Antoine Bourdelle, and Elie Faure. Lurçat and three associates founded the Feuilles de Mai (The leaves of May), a journal of art in which these celebrities participated. He then became an apprentice of the painter Jean-Paul Lafitte with whom he had an exhibition at La faculté des sciences de Marseille. His first journey to Italy was interrupted in August by the declaration of war. Back in France, Lurçat joined the infantry, but was evacuated on 15 November after falling ill. During his recovery to health, in 1915, he practised painting and lithography. In July, 1916, he returned to the front, but was evacuated once again due to injury. He never returned to the front. In September, his art was put on exhibition in Zürich.

In 1917, Jean Lurçat made his first tapestries: Filles Vertes (Green Girls) and Soirée dans Grenade (Evening in Grenada). At the end of the war in 1918, he returned to Switzerland where he had a holiday in Ticino (Swiss Italy), with Rilke, Busoni, Hermann Hesse and Jeanne Bucher. His second exhibition took place in Zürich in the same year. In 1920, he travelled extensively: Berlin, Munich, Rome, Naples. Then he took up residence in Paris with Marthe Hennebert. It was she who wove two tapestries: Pêcheur (Fisherman) and Piscine (Swimming pool). He unveiled in the same year, at Le Salon des Indépendants, two tapestries and four paintings. He met the art merchant Étienne Bignou.

In 1921, Jean Lurçat met Louis Marcoussis, he discovered Picasso and Max Jacob, and created decoration and costumes for Le spectacle de la Compagnie Pitoeff: “He who receives slaps”, and then spent the autumn near the Baltic sea. The following year, he created his fifth tapestry, Le Cirque (the circus), for Mme. Cuttoli. His first personal exhibition took place in Paris in April and September. He made a large decoration on a wall (no longer visible today) at the Castle of Villeflix. Then he went to Berlin, where he met Ferruccio Busoni.

During the next two years Lurçat resumed travelling. In 1923 he went to Spain; in 1924 he went to North Africa, the Sahara, Greece and Asia Minor. Upon his return, he signed a contract without exclusivity with his friend, Étienne Bignou. His brother André built his new house, Villa Seurat, in Paris. He devoted a portion of the year 1924 to the making of his sixth tapestry, Les arbres (The trees). On 15 December, Lurçat married Marthe Hennebert and traveled in 1925 to Scotland, then Spain and northern Africa. Upon his return, he took up residence at La Villa Seurat. He participated in several expositions with Raoul Dufy, Marcoussis, Laglenne and others. He revealed, at the home of Jeanne Bucher, elements of decoration (carpets and paintings) of Le Vertige, a film by Marcel l’Herbier. In 1926, he exhibited in Paris and Brussels, and participated in collective exhibitions in Vienna, Paris, and Anvers. His fame began due to several articles devoted to him.

With the company of Marthe, he departed in 1927 for the Orient and spent the summer in Greece and Turkey. He decorated the lounge of the family of David David-Weill. There are four tapestries in developing and implementing L’Orage (The storm), for George Salles (Musée national d’art moderne National museum of modern art). He returned to Greece and Italy (Rome) in 1928 before embarking in October for the United States of America, for his first exhibition in New York. He spent 1929 in Marco. In 1930 he had exhibitions in Paris, London, New York, and Chicago; he created nine drypoint illustrations for Les Limbes (The limbo) by Charles-Albert Cingria; and he made another visit to America. In that same year he divorced Marthe Hennebert. In 1931 he married Rosane Timotheef and they took up residence in Vevey (Switzerland). He wrote several articles about painting, and reduced his production of pictures.

In December, 1932, Lurçat participated in the exhibition Sélections with Matisse, Picasso, Braque, Derain and Raoul Dufy; the event was organised in New York by the Valentine Gallery. Being aligned with the far left, from then on he often mixed his political opinions with his art. In 1933, he was living in New York. He created the decoration and the costumes for the Jardin Public (Public garden), a ballet by George Balanchine. 1933 also saw his first tapestry sewn at Aubusson, following the new and revolutionary technique that he developed.

In 1934, Lurçat returned to New York where he participated in the creation of new decoration and costumes for a choreography of Balanchine; which he unveiled in Chicago and Philadelphia. Then he returned to Paris and Vevey for the summer. At summer’s end, he departed for Moscow, where he had an exhibition at the Musée Occidental (Western Museum), then at the museum of Kiev. In 1935, he painted the Dynamiteros in Spain; with inspiration from the revolution and the War of Spain. In Paris, he participated in the activities of the Association of the revolutionary authors and artists. Then, he followed, with Malraux and Aragon, the Journées d’amité pour l’union sovétique (The afternoons of friendship for the Soviet Union). In 1936, he exhibited in London and released his first tapestry, made at la manufacture des gobelins (The manufacturing of the goblins), Les Illusions d’Icare (The Illusions of Icare). In 1937, he met François Tabard.

In 1936, Jean Lurçat was inspired when he saw the tapestry L’Apocalypse (the apocalypse), which was woven in the 14th century. In 1938, moisson was sewn. In 1939, he exhibited in New York and in Paris. In September, he took up residence in Aubusson with Gromaire and Dubreuil in order to renovate the art of tapestry, which at the time had fallen to a low point. His innovative technique used a simplified palette and robust weaving at broad point. During this period he abandoned oil painting in favour of poster paints. The Musée national d’Art moderne (National museum of modern art) acquired Jardin des Coqs (Garden of roosters) and L’home aux Coqs (The man of the Roosters), of which the cardboard would be destroyed by the SS in 1944 in Lanzac. In 1940, he collaborated with André Derain and Raoul Dufy.

In June, 1944, he associated himself with the fighters of the communist resistance, namely, Tristan Tzara, André Chamson, René Huyghe, Jean Cassou, and Jean Agamemnon. He was put on the Comité de Libération (Comity of Liberation). He also met Simone Selves, who would later become his wife. His adoptive son, Victor was captured while on an intelligence mission in France and was put to death. Lurçat would not learn of his disappearance until the following year. 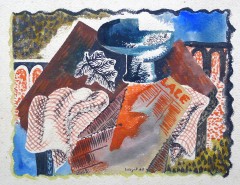