William Tillyer etching printed in orange on handmade wove paper, published in 2010 by Bernard Jacobson Gallery. The etching signed in pencil by the artist. This etching is from ‘The Flatford Chart’ series. Printed in a very small edition size of  20 copies only. In excellent condition.

‘The decision to borrow from Constable is not arbitrary, I have long been a devotee, and living here in the North East of England between moors and coast, I’ve been a constant sky and cloud observer. By taking such well-known studies of clouds, often with references to trees and growth at the bottom edge giving scale, one is able to invoke all that the chosen image implies or suggests – taking it for ones own and putting it to work in an altered form.
I have imagined that Constable’s father, at Flatford Mill, would have been a constant ‘sky watcher’, perhaps putting together an observers ‘cloud chart,’ vital for a miller dependent on weather and water as his power source. Hence my title, The Flatford Chart Paintings with the smaller Cloud Studies, I have simply substituted Helmsley for Hampstead. Much of the foregoing refers to the kind of image I wanted for this new group of work; one which invokes so much, dictating colour, palette, pigment and tone, as well as a romantic, lyrical vision by default.’        by William Tillyer 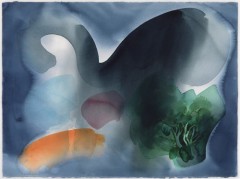 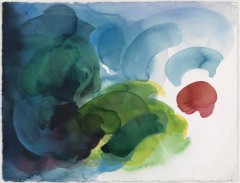 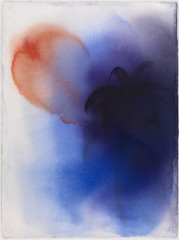 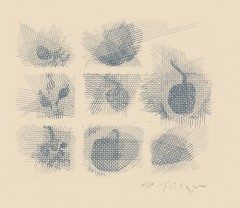 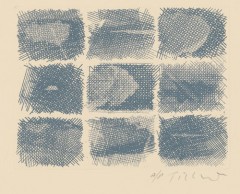 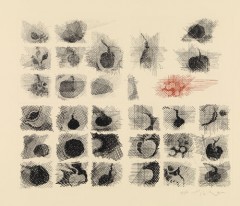